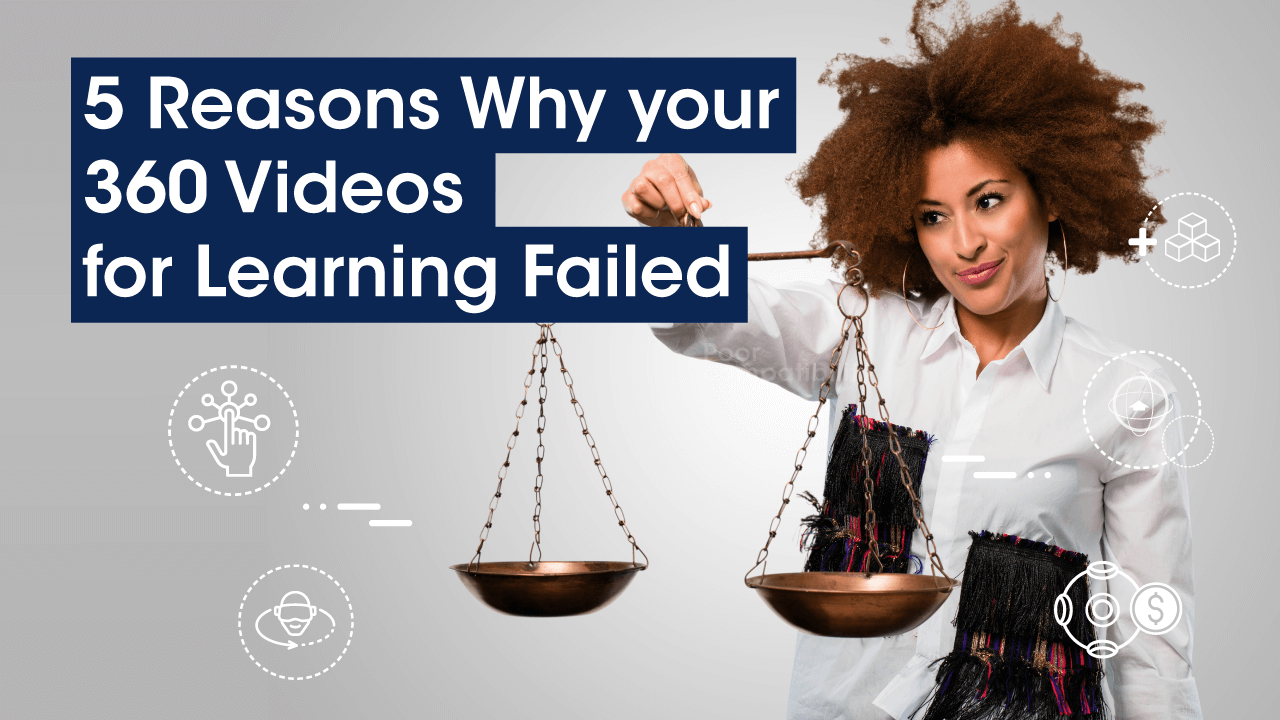 A lot of educators have already started using off-the-shelf 360 videos with their learners. Developing own 360 videos still seems to be a challenge causing great levels of frustration amongst learners, creators, and educators. We often hear feedback from professionals in the industry, and their disappointment of failed 360 video development and implementation projects is real.

New technology is often exciting and innovative and even more so when introduced to the learning market. Everyone wants to give it a try but not all solutions seem to be the right fit for our classrooms. Pros and cons are attached to everything and 360 videos are no exception. 360 media development and distribution aren’t that straight forward as many might think. Rushing into such projects isn’t the best idea and seems often to be the culprit of why we fail.

Pros and cons are attached to everything and 360 videos are no exception.

Why 360 Media for Learning Failed?

While getting started with 360 media for learning, creators often don’t ask the right questions around equipment, distribution platforms and the reasons to why this video format is the right choice for meeting a specific learning objective. Besides getting clear on why to choose this video format the next questions we need to ask ourselves should be ‘which camera should I use and how should I actually share my learning media with my audience?’ Camera manufacturers and social media platforms sprinted into offering 360 video cameras and playback functionalities with low output quality and user experience.

Let’s dig into our top reasons causing the failure of 360 videos and images in learning:

… And consume lots of space on servers. Thinking of sharing 360 videos on social media platforms can cause challenges since upload limitations might apply and your videos won’t be shown or not shown in full. Mind the length of your videos and the size of your files and keep it short.

… After reading our first reason for failure you know now that 360 videos are HUGE in size. This is not only a problem for server space but also for our bandwidth when streaming or downloading such videos on mobile phones or other devices. You either need to provide your learners with access to free WIFI, make sure they have enough data volume available on their devices or make sure you have devices available which have those videos already downloaded.

3. It’s all about the money

… ‘Cheap’ 360 cameras are creating poor videos. I have to buy an expensive camera’. Well that’s not entirely true! It is not all about the price tag. You need to check on the recording resolution. Stay away from cameras with a resolution less than 4K. 4K to 8K is your frame!… and you will see. There are good cameras out there for less than 200 USD.

4. Motion sickness – not your best friend

… Any resolution lower than 8K paired with extensive movement are not a good idea. Your audience will most likely experience nausea and headaches. The solution to it is easy! Reduce any kind of camera movement as much as possible and you don’t need to fear your classroom audience to fade away.

… Here we are with another challenge! BOYD- bring your own device- policies make it unpredictable if your audience’s devices are 360 video ready. Older models might lack the technical specifications required to play 360 videos. Sending out a list of compatible devices ahead of class and providing additional device for those who don’t have the option to replay your learning material can help.

… Unlike regular video production, 360 videos give lots of freedom to its viewers but not for their creators. Derek Muller, a popular science YouTuber, says that in his videos, he wants to help direct our attention. “I want to show you the things that I think you need to see in order to understand what I’m talking about. I don’t want you looking to the side or behind you.” – DM, Why Spherical Video is a Bad Idea. Creating a strong storyboard with clearly defined actions and visual elements is key to predict your learner’s focus as much as possible.

As you can see- asking and answering critical questions prior to the development and implementation of 360 learning media can make all the difference.

About Total
Total is the most flexible WordPress theme you'll ever meet, and it's quite possibly the last theme you ever need or want to buy. Don't believe us? Just checkout the live theme demos. VIEW THE DEMOS
2020  | MINDSED | Todos los derechos reservados | Implementado por | Mindsed
Back To Top

Your data, your choice

This website uses cookies to improve your experience while you navigate through the website. Out of these, the cookies that are categorized as necessary are stored on your browser as they are essential for the working of basic functionalities of the website. We also use third-party cookies that help us analyze and understand how you use this website. These cookies will be stored in your browser only with your consent. You also have the option to opt-out of these cookies. But opting out of some of these cookies may affect your browsing experience.
Necessary Always Enabled
Necessary cookies are absolutely essential for the website to function properly. This category only includes cookies that ensures basic functionalities and security features of the website. These cookies do not store any personal information.
Functional
Functional cookies help to perform certain functionalities like sharing the content of the website on social media platforms, collect feedbacks, and other third-party features.
Performance
Performance cookies are used to understand and analyze the key performance indexes of the website which helps in delivering a better user experience for the visitors.
Analytics
Analytical cookies are used to understand how visitors interact with the website. These cookies help provide information on metrics the number of visitors, bounce rate, traffic source, etc.
Advertisement
Advertisement cookies are used to provide visitors with relevant ads and marketing campaigns. These cookies track visitors across websites and collect information to provide customized ads.
Others
Other uncategorized cookies are those that are being analyzed and have not been classified into a category as yet.
SAVE & ACCEPT